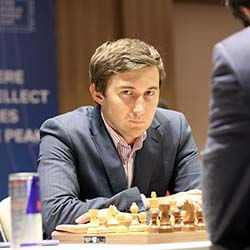 Russian chess grandmaster Sergey Karjakin has reportedly been banned from the sport for a period of six months. The ban follows his public support of Russia’s war with the Ukraine, confirmed the International Chess Federation (FIDE) on Monday.

Karjakin’s defense of Russia’s actions on social media has attracted heavy criticism from the international world of chess.

According to the sport’s governing body, Karjakin’s actions had placed the grandmaster in breach of the sport’s code of ethics. Karjakin will for the next six months not be permitted to participate in any FIDE-rated contest.

A native of Crimea, Karjakin represented the Ukraine up until 2009. The 32-year-old now claims he has been unduly targeted because of his support for Russian president Vladimir Putin. He also referred to the FIDE’s decision as shameful and unnecessary, while adding that the principle of sport being out of the sphere of politics has now been trampled.

Karjakin added that he was a patriot of his country first and foremost – and a chess player second. He added that he has no regrets for having voiced his support and stance on the matter involving Russia and the Ukraine.

Russian grandmaster Sergei Shipov has in the meantime escaped similar sanctions. According to a ruling by FIDE, while Shipov had voiced support of Russia, his comments had not been nearly as “provocative” as those made by his counterpart.

The ban means Karjakin will likely not be permitted to compete in the Candidates Tournament in June.